Aloha. My full name is Gabriele Angelo Ciminelli and it has given people enormous trouble over the years! Though it might be a name that sounds like it is from the renaissance era, I can assure you I do love my name. To make things happier […] It’s not uncommon for students to take a study abroad year. It’s just that I was 37 when I took mine. I completed my first bachelor’s degree in 2001, joining Golden Key at that time, and then completed a second bachelor’s degree part-time by distance […] As the sole Founder and Director of Clinics For Kids (CFK), I am proud to have grown CFK to include more than 20 professionals and health students. This includes researchers, doctors, medical students, dentists, dental students, optometrists, and nurses, including 4 Aboriginal Australian members. At CFK we believe in pushing the boundaries of what’s possible; we believe in thinking differently.

My commitment to service in the non-profit health sector best illustrates my ability to create lasting change in the world. I am deeply involved in this work and it has become an extremely important part of my life. As a dental student, I feel incredibly privileged that many of the skills I learn in my post-baccalaureate dental degree are directly applicable to supporting others.

In June 2019, with a personal loan from the bank, I was able to launch a large paediatric dental initiative in rural Uganda, Africa.  My team provided more than 35 kilograms of toothpaste, 1,000 toothbrushes, oral hygiene workshops, and dental examinations for more than 1,000 children. We also performed more than 300 dental cleans and more than 300 emergency treatments over 2 weeks.

This year, my team has continued to demonstrate a new standard in student led collaboration in the charitable health space, through engagement with the local homeless population.

Leveraging existing relationships with our dental school, local dental clinics and homeless service provider partners coupled with our track record of treating many patients at a low cost, our next project aims to provide emergency dental care to more than 100 local homeless over three non-consecutive clinical days. Our first clinical day on April 7th was a tremendous success.

I am also leading a team, along with 2 colleagues, for 2 non-consecutive weeks, in Cherbourg where we will provide dental treatment for more than 200 Indigenous Australians. These clinics will take place on June 21-25 and for a week in November. Perhaps the truest sign of real passion is what someone chooses to focus on whilst facing a life-threatening illness. My name is Michael Cowling, and I joined Golden Key in 1997, having been invited during the first year of my Bachelor of Information Technology degree […] Marisa Duong joined Golden Key in 2017 after discovering the society through her Bachelor of Philosophy degree coordinator. Marisa was seeking the opportunity to develop her academic career and explore fields of research that interested her. After learning more about Golden Key’s philosophy, Marissa found the three pillars – Academics,  Leadership and Service – resonated strongly with her.

The committees emphasis on academics offered her a chance to network with others who share a passion for their profession.

Marisa started as the Professional Development Officer, before stepping up as the first President of the University of Western Australia Chapter. During her time with Golden Key, Marisa has gained numerous skills. Notably, she has learnt marketing and promotion skills, and improved her ability to convey compelling ideas to others.

Marisa’s goal within the UWA Chapter was to create a ripple effect throughout the Golden Key community. She says she wanted to reach out to connect future students, current students and alumni and create a group which helps each other and gives back to the community.

“The people who I worked with are so inspiring. They are what gave me a sense of community and belonging. I wanted to give back to the community that has given me so much,” Marissa says. Marisa says seeing others strive inspires her to develop her skills, network with others, and create a strong community vision with a sense of belonging.

“The more you put in, the more you will get out of this experience,” Marissa says.

“It is not enough to idly participate. The society is much more than just a CV item. You can attend seminars, propose ideas about events to the local committee, or join the committee yourself.

“The resources and global connections you can form will not happen on their own; you must actively seek them out.”

Marisa recently submitted her PhD thesis in Biochemistry, focusing on molecular science proteomics. She is now working as a researcher at Harry Perkins – Proteomics International.

She says the importance of networking with like-minded industry professionals helped her get to where she is in her career.

In the coming years, Marisa aims to influence the direction and vision of her field,  by growing and thriving as a researcher focusing on bio-markers, early diagnosis and drug treatment. 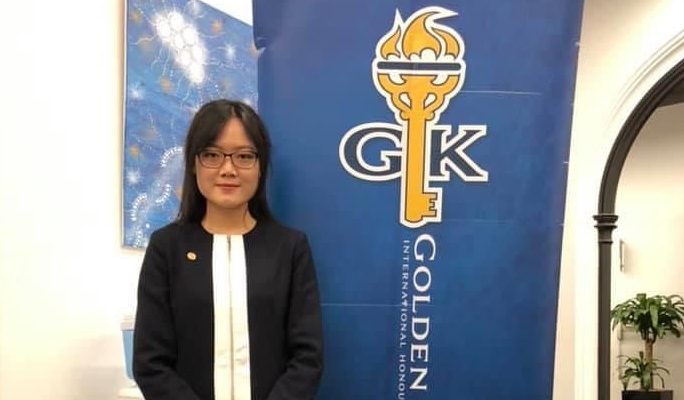 Golden Key strives to encourage its members in three aspects: Academics, Leadership and Service. Kitty Hoi Yan Wong, a Golden Key member since 2017, perfectly encapsulates the values of Golden Key, and her work in Community Service has proved truly impactful to her local community. […] 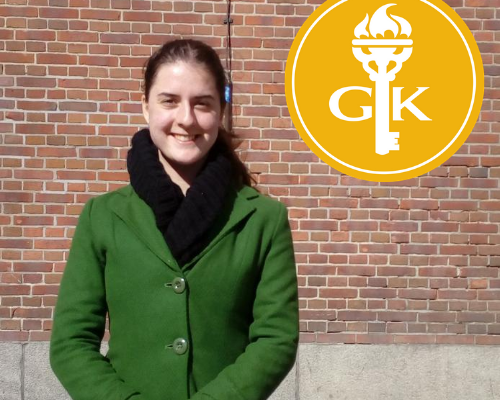 Caitlin Kramer began studying Robotics engineering at Flinders University in 2016 and is now in her fourth and final year, with big plans for her future. Throughout her degree, Caitlin has expanded her knowledge by taking part in three overseas trips, which she says gave […] 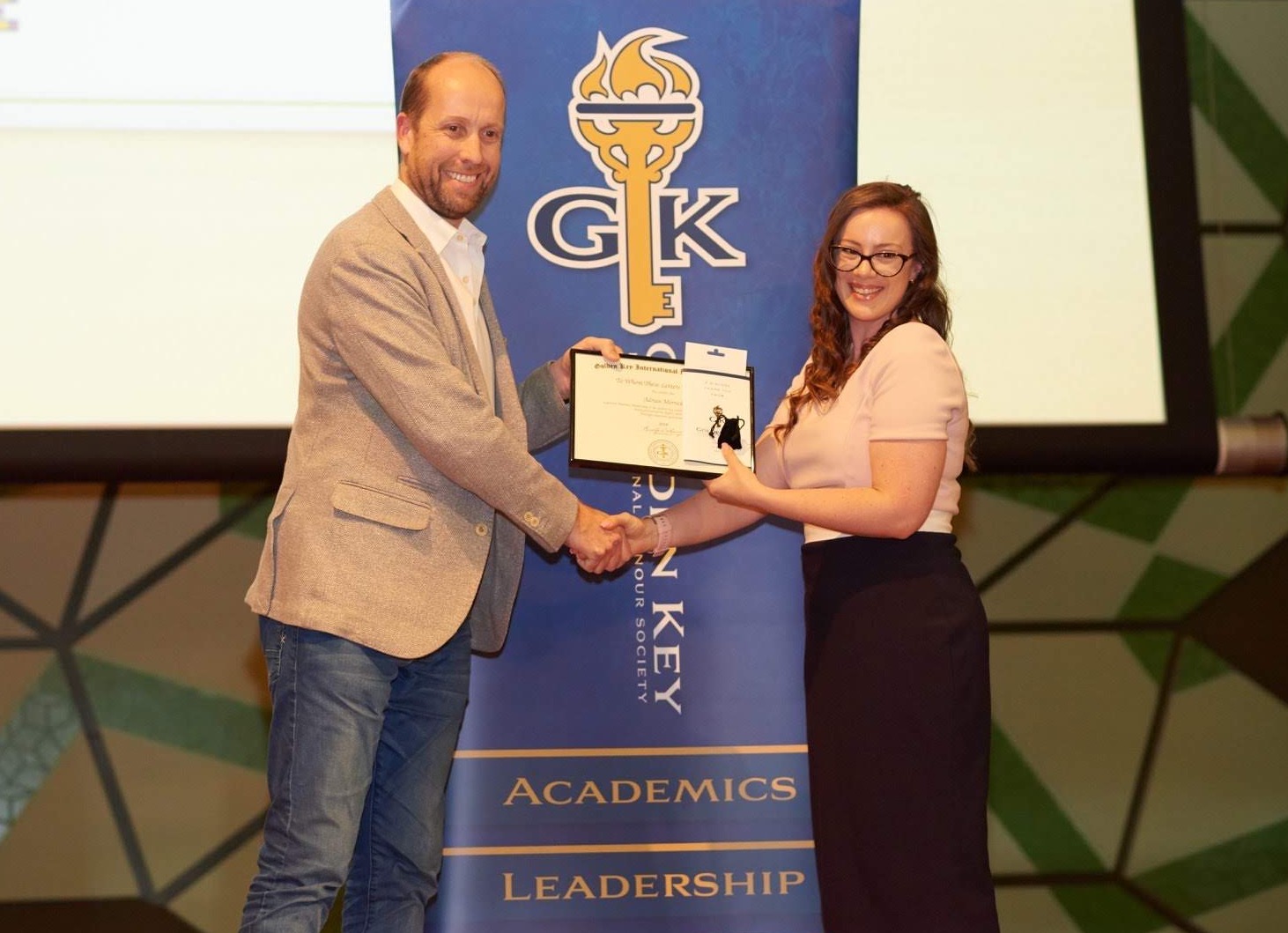 Elyse Heslehurst is a name many Golden Key Asia Pacific members may already know. A member since 2013, Elyse joined Golden Key after her family received the invitation on her behalf while she was on exchange in the USA. The trip allowed her the opportunity to observe GK in its founding country, along with all the benefits the organisation provides members. This inspired her to heighten the organisation’s reach in her hometown of Canberra.

Elyse spent many years on the Canberra University committee, serving as President then Public relations officer, before becoming a member of the Golden key Asia Pacific team and taking up the role of University Relations Officer. Over the last seven years, she has proven herself to be a member that has truly worn all the hats.

Elyse says despite already working full time when she joined, she wanted to serve on the committee to embrace the opportunities it provided. This proved slightly difficult due to the lack of committee members and student engagement facing her committee.

“When we started on the committee, we had myself and a Vice President and that’s all,” Elyse says. “By the end of the year we had a secretary. The next year, we doubled our committee, and then the year after it almost tripled.”

Elyse used her time on the Canberra committee to build connections and network with professionals, which ultimately led to her being offered a full-time position at Golden Key.

“I was still on the committee, I was working full time, and I attended the APAC summit in Melbourne and at the conference, I caught up with Mark,” Elyse says. “I left the conference, and it was only a couple of weeks later I got an email from him, saying we have a position at Golden Key, are you interested?”

From there, Elyse began acting as a mentor for various Golden Key committees. She says during this time she watched many students grow by engaging with others to increase their social knowledge.

“You don’t always get a job because of the knowledge you know, sometimes it is because you are willing to learn, and (employers) can see that. That is the big difference.”

Remarkably, while also working full time with Golden Key, Elyse began studying a Master of Business Law. She says this challenged her in unique ways, but ultimately afforded her the ability to build on her time management skills. Like many, Elyse has unfortunately faced the challenge of graduating during isolation. However, despite the indefinite postponement of her graduation ceremony, Elyse has remained optimistic and celebrated this milestone achievement in her own unique way.

Elyse says she performed a photo shoot with her certificate and a graduation cap she still had from her undergraduate.

“I had to get (my certificate) sent to me in the mail and it was sad because I didn’t get to walk across the platform but hopefully, I will get to attend one in person at the end of the year.”

When asked about her future plans, Elyse says the sky is the limit.

“I have lots of ideas. I have never wanted to give myself one end goal… I am loving what I am doing, training and developing, and designing programs, but I think the 5-year plan for me would be to eventually own my own business.

“Something that is organising events but also focusing on that motivational and leadership side of things and running workshops with that.”

No doubt, we will see big things coming from a member that has worn the various hats Golden Key has to offer. Advancing yourself above your peers is never easy, but Mary Aidonopoulos is proof that a Golden Key membership can help set you apart from the crowd in whatever field you are studying. Mary received her invitation to join in 2016 where she was studying a […]